Shanghai Tongren Hospital researchers conclude that acupuncture combined with herbal medicine is effective for the alleviation of tinnitus. References to tinnitus exist throughout ancient Traditional Chinese Medicine (TCM) literature, including approximately ten references in the Huangdi Neijing (The Yellow Emperor’s Classic of Medicine). Now, modern research verifies the efficacy of both acupuncture and herbal medicine for the treatment of tinnitus. 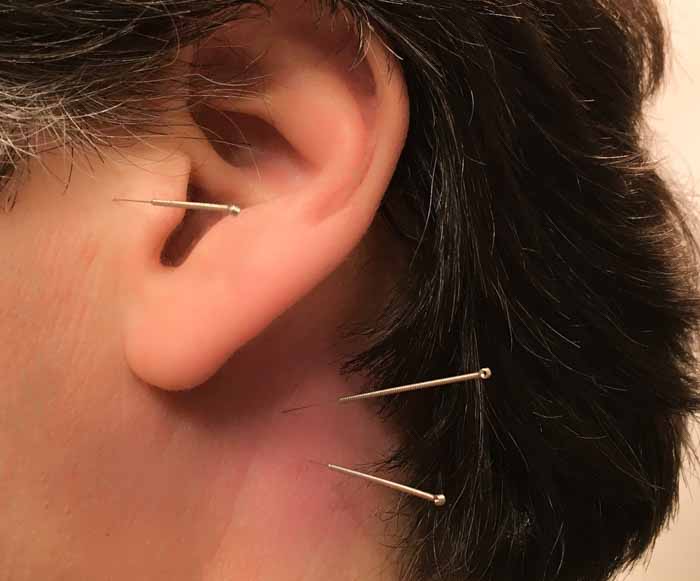 For each diagnostic pattern group, a specific acupuncture point prescription and herbal medicine formula were prescribed. The primary acupoints selected for all treatment participants were the following:

Additional acupoints were administered based on differential diagnostic patterns. For kidney yin deficiency patients, the following acupuncture points were added:

For hyperactivity of liver and gallbladder fire patients, the following acupoints were added:

For unrisen lucid yang, the following acupoints were added:

Needling of the ear’s tragus employed a classic three point prescription for the treatment of hearing disorders: Ermen (TB21), Tinggong (SI19), Tinghui (GB2). With the patient’s mouth open, a needle was perpendicularly inserted into each acupoint to a depth of 0.5 – 1 inches. Zusanli (ST36) and Sanyinjiao (SP6) were pierced to a depth of 1 – 1.5 inches. Subsequently, the rest of the acupoints were inserted and a 30 minute needle retention time was observed. One acupuncture session was conducted daily for 2 consecutive weeks. TCM herbal formulas were prescribed based on diagnostic patterns. For kidney yin deficiency patients, a modified version of the herbal formula Er Long Zuo Ci Wan was prescribed, which contained the following herbs:

For hyperactivity of liver and gallbladder patients, a modified version of the herbal formula Long Dan Xie Gan Tang was prescribed, which contained the following herbs:

For excess heart fire patients, a modified version of the herbal formula Dao Chi San was prescribed, which contained the following herbs:

For unrisen lucid-yang patients, a modified version of the herbal formula Bu Zhong Yi Qi Tang was prescribed, which contained the following herbs:

The prescribed dosage was one decoction daily. The above ingredients were brewed with water to obtain a 200 ml decoction, which was then split into 2 servings, taken separately in the morning and at night. Patients consumed the TCM herbal medicine at this rate for 2 consecutive weeks.

Psychological intervention for the treatment group was also provided. It involved cognitive and behavioral therapy to relieve patient anxiety and help them adapt to their surroundings by listening to music as a distraction from symptoms. Patients received psychological counseling after tinnitus was mitigated in order to reinforce the therapeutic effects and boost treatment efficacy. The tinnitus severity of each patient was graded before and after the treatment course based on the Tinnitus Handicap Inventory (THI). After treatment, the treatment efficacy for each patient was categorized into 1 of 4 tiers:

The total treatment effective rate for each patient group (treatment and control) was derived as the percentage of patients who achieved at least an effective tier of treatment positive outcomes. The clinical results of this study demonstrate that tinnitus patients benefit from a combination of acupuncture and herbs.

This confirms the findings of Xue et al., whose research entitled Treatments Of Cervical Tinnitus Between Neck Acupoints Acupuncture And Traditional Acupuncture published in the Jilin Journal of Traditional Chinese Medicine concluded that acupuncture benefits patients with tinnitus. They investigated a type of tinnitus related to cervical disorders at the Central Hospital of Otolaryngology and Head and Neck Surgery (Chaoyang City, China). The researchers achieved an 80% total effective rate using the following acupuncture points:

The frequency of treatment was once per day for a total of 18 acupuncture treatments. Song et al. had similar results in their investigation. The used the following acupuncture points:

The total effective rate was 91.18% with the following breakdown of improvement tiers: 64.17% fully recovered, 14.71% significant improvements, 11.76% slight improvements, 8.82% no improvements. Tinnitus is a difficult and often intractable illness. The researchers tested various approaches to the application of acupuncture and herbal medicine. The results demonstrate that consistent and frequent acupuncture and herbal medicine treatments yield significant positive patient outcomes for patients with tinnitus.